ZSK is one of the oldest embroidery machine manufacturers in the world. We deliver and service equipment in more than 100 countries around the world. One of the most popular questions asked by potential customers is - Why ZSK?

At ZSK we like to understand first what is the right solution for our customer. Before we can explain benefits of ZSK machines, we have to understand the requirements of the potential customer. It sometimes might appear complicated and time consuming to be asked a lot of questions, but the result is the path to the right choice.

At ZSK we believe in customer specific solutions. At times, this leads to longer delivery times and it results in a much higher variety of possible choices when ordering a machine, but in the end, we build and deliver the machine that brings you to the next level.

Considering the home textile market – head distance and field depths are certainly important factors. Most important is right fabric clamp for the respective application. At ZSK our customers have the choice of 4 different clamps that are equipped with different springs and interlock or without. Why is this? The stronger a spring, the more difficult the clamp is to handle for the operator. For standard applications, we always have to keep ease of the use for the operator a priority. As we approach designs that exceed 500.000 stitches per head we start seeing the difference between machines from the competition and ZSK. The ZSK clamp remains on the border frame and does not move. Other clamps will lose its position and can cause a damage in the fabric.

In the factory, each machine is assembled as per the customers’ requirement. A tubular machine generally has the choice between tubular, cap and border frame or all options in one machine. This is just the starting point. The next choice is the spring for the presser foot – certain materials like leather, strong caps, carpets will require a stronger presser foot. In case of extremely high materials (fabrics with foam) we offer extended presser feet. Further choices include safety options, status lights, machine height, colours, frames and many more.

We differentiate between 3 different embroidery heads – F head, K head and W head. The F head is a standard embroidery head and is offered with 6, 9, 12, 18 and 24 needles. The K head is often described as a Chenille head and does chain and moss stitches. The W head is suitable for coiling, taping and cording. ZSK offers machines that only carry each of these head types, a combination or all three of them.

Head Selection versus D, T or Q drives. When looking at different brands, the choices of letters in the machine names is very interesting and often difficult to understand. At ZSK tubular embroidery machines have gone through development cycles with names such J, JF, JAF, JAFA and RACER. The flat machines have started with M, MF, MCF, MCFA/B and are today called CHALLENGER. In case of flat machines each letter has a meaning – in MCFB the first two letter represent the length of the machine body, the third letter represents the head type (F = standard, W= cording, K= chain, H = F+K, Z= F+W, V= F+K+W). The machine model is followed by the number of head, the number of needles per head and the head distance. The head distance can be a standard distance or can come in connection with the letter D, T or Q. These letters stand for double, triple and quadruple. This represents the repetition of head distances one head can work in. If the machine is equipped with a double drive, then (when every second head is switched off) each head can not only embroider in the typical embroidery field, but also in one further field next to it – as the side movement of the frame is sufficiently large. When very large designs are produced or when more colours are needed or more devices in each design, then this is of benefit.

Imagine an eight-colour sequin design – each side of the embroidery head can be equipped with one twin sequin device. Every head therefore can handle up to four colours. By using two embroidery heads and let them work together on one design, we can switch heads on and off automatically, we can now work with eight colours in one design.

A standard feature of the Challenger and Racer I & II Series is the Head Selection. Head Selection is a ZSK term where the capability if often not understood. The feature does not only avoid the take up lever to move up and down when a head is switched off (and avoids thread coming out of the needle) but it can do a lot more – for any customer! The ZSK Digitizing System GiS BasePac offers the QuickText feature with Head Selection.

QuickText with Head Selection – the feature allows embroidery of team names (Quicktext) with an efficiency not know so far. A typical embroidery job might involve patches with a company logo and a name below it. A requirement might be 3 patches per person. In this case the system allows all 4 heads to run the same logo and afterwards one head is automatically being switched off and the 3 equal names are embroidered. Afterwards the last head is automatically switched on to embroider one name of the next three names. The information can be exchanged via Ringbuffer (network) between machine and the GiS system. 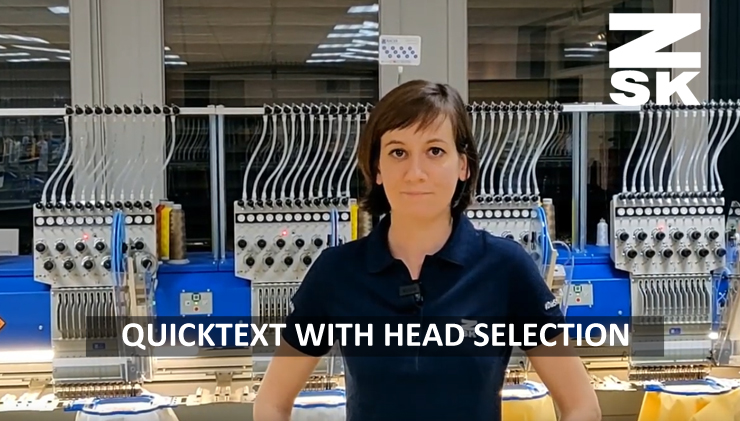 Please accept all cookies to be able to watch the video.

This video is a Webinar About the Quicktext feature in BasePac10. It provides a head selection function that allows to run templates with names on multi-head embroidery machines.

Head Selection in flat machines is used for items like flags, bed sheets, curtains and table clothes. The digitizing software is used to assign each head different paths of the design or in case of borders to operate all heads at the same time. The system allows automatic control of which head is embroiderung which design feature and switches heads on and off automatically. This feature is ideal for machines with small head distances that are extremely efficient for borders with a high stitch number. In the center of such designs often larger elements are required. Connecting design elements between different heads creates a result as if machines with large head distances would have been used.

To find your optimal machine you should define the maximum border frame size that you need for your designs. The embroidery field size can then be reduced in depth by an “Adjusting Rail” and in width by a “Divider”. To use wooden hoops in a border frame the machine requires the “Fastening Set Adapter” also called Z-200 or Z-360. ZSK offers a variety of wooden hoop sizes that can be connected to this system. The frames are fixed at the front of the frame with the fastening set and are hold with a 3rd point at the adjusting rail.